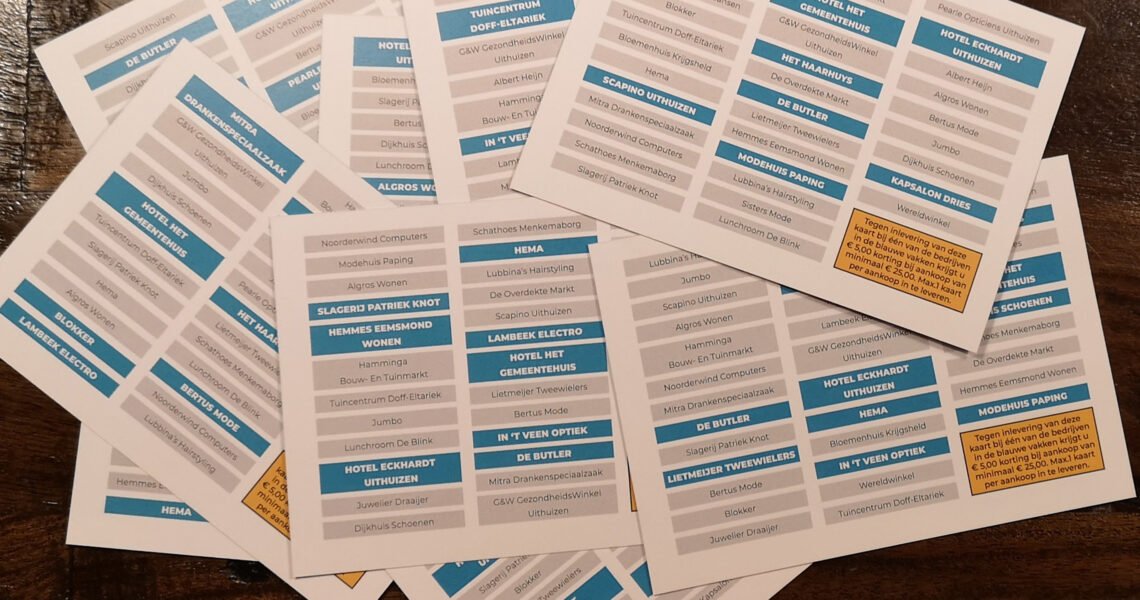 At the start of the 2020 CoronaVirus, the business group for the village of Uithuizen in the Netherlands, planned a discount card scheme to support local retailers.

The plan was to support 34 local businesses, 10 of which had been severely impacted by the Corona disruption.

1000 cards were produced and all business names were to be in a complete random order and position on the reverse.

The reverse of each set showcased 10 local businesses, each with five of the affected ten companies always shown on the reverse. Five others were chosen randomly from the remaining 29 businesses on the page.

To showcase all the 39 companies (10 more than others), it was decided to break the 1000 cards into two sets of 500, so each 500 set can always showcase five of the majorly affected ten companies.

Each card to have 34 business names on the reverse.

Each card to include 5 random company names highlighted from the remaining 29.

Each card to have all company names in a different order and position.

So how was all this controlled randomness achieved?

It was decided to split the project into two sets of 500 cards. Each set would have five static named businesses, always highlighted along with a further five taken from the remaining 29.

The project was put together with a mix of Excel, LibreOffice and InDesign; using data merge, character styles, anchored text boxes and a three column balanced master frame.

The data merge was the more simple part of this project.

A master InDesign single page document was created for the data merge master. It contained a three column text frame on the only page. This text frame was set to “Balance columns”, meaning the items placed inside would automatically balance visually.

Inside the master three column text frame was placed 34 individual Anchored text frames, each with a minimum 5mm height to keep size consistency and auto height applied to allow the frame to resize for two line company names. These frames were designed to flow between the three columns. The taller final text frame was allowed to automatically resize its height, so to buffer and fill any space in the column left over.

The final bottom fixed panel was placed as an anchored object with Bottom text frame with auto height applied allowing the panel to stretch to fit if needed.

The justification of the bottom frame was set to vertical justify. This will force the text lines to fill the frame should it need to stretch.

A data merge was applied to the indesign file and text was imported into each anchored frame. Text from the Excel CSV started with either an ! (exclamation mark) or a – (hyphen).

Finally paragraph styles were applied and the front character removed.

The turquoise and grey backgrounds filling the anchored text frames were applied in the text paragraph styles, clip to frames was applied in the style to fill the text box.

Grep was used once again to remove the first character (exclamation mark or hyphen) of the each paragraph.

The text in the final text frame was given a paragraph style on the data merge, resulting in eight documents of 125 pages each with randomized names and positions. A video is below.

Video of the final pages.

Digitally printing the cards allowed each reverse to be different.